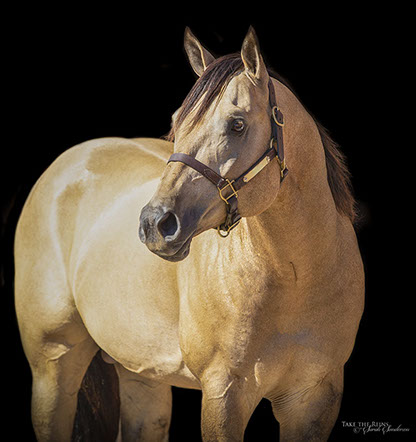 Hankerelse, aka Ranger, is a gentleman and a joy to be around. He loves to turn a barrel. He is dead quiet until you ask him to run, and then he will fire hard and mean business. He is not stud lazy, just a quiet willing mind. We run him in a Bozo side-pull and he is very light. We do not exhibition his as he is very responsible to find his barrels. He is very balanced and level and has exceptionally strong feet and bones. His feet are hard and grow down without flaring or chipping. He has a wonderful natural cup and depth to his soles which holds the ground. We run him barefoot. He is 5 panel Negative. His first foals were born Spring of 2021. Many references from the West Texas barrel racing community are readily available to tell you about the temperament of this beautiful stallion.

Hankerelse is by Letta Hank Do It (champagne palomino), by Snazzy Hank SI 104. Letta Hank Do It (LHDI) was a Barrel Futurity, Derby, and WPRA earner, and Finalist at World Championship Barrel Futurity, Laze E Barrel Futurity, Texas Barrel Derby, etc. LHDI has sired multiple Black Type Barrel Race and Futurity Champions such as Imanonstop Princess- ridden by Jackie Jatzlau. As a maternal grandsire, he has produced 2016 Fort Smith Futurity Champion KN Penellapie and 2015 American Semi-Finals Champion Imanonstop Fame. He is a maternal brother to Fire Water Flit, both out of the legendary Slash J Harletta; recognized as an all time maternal producer of barrel horses. Slash J Harletta was 1961 AQHA Open Performance World Champion and National Finals Rodeo qualifier, dam of 8 foals; 6 were Black type barrels horses with total barrel earnings over $500,000. “Harletta” produced 3 NFR qualifiers, and five other offspring that were futurity and/or derby champions.

Hankerelse is out of Rosa Runner. 2012 BHN Stallion Register listed Rosa’s sire (Runnerelse) and dam (Livin Proof) as the #17 Five-year Leading Barrel Magic Cross. Non-equistat earnings for full siblings include WPRA, Prairie Circuit Finals, College NFR Qualifiers and regional champions. Runnerelse (1981) had barrel race LTE of $50,000, and was ranked #4 in barrel horse sires in 2009, and multiple listings in Barrel Horse News 10-year stallion stats top twenty horses. He is the sire of Running Richochetbar $160,000- 2009 Lance Graves Pro Classic Champion winning $109,000 while sweeping the Slot Race, the BFA Futurity and Race 2 in the NBHA 4D Super Show; Jettas Joker $120,000, etc. Runnerelse was by Magnolia Bar, and out of Buck’s St Pat- $40,000 plus barrel race earner and multiple rodeo titles, including winning MSRA Finals from 1980-1983; MSRA Barrel Horse of the Year in1984. Rosa’s dam was by a son of Rebel Cause , and out of a daughter Gallant Jet . 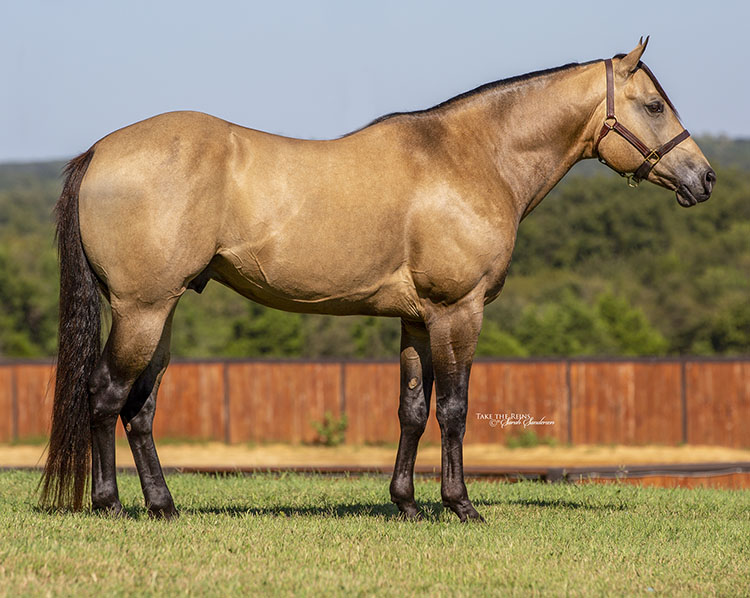 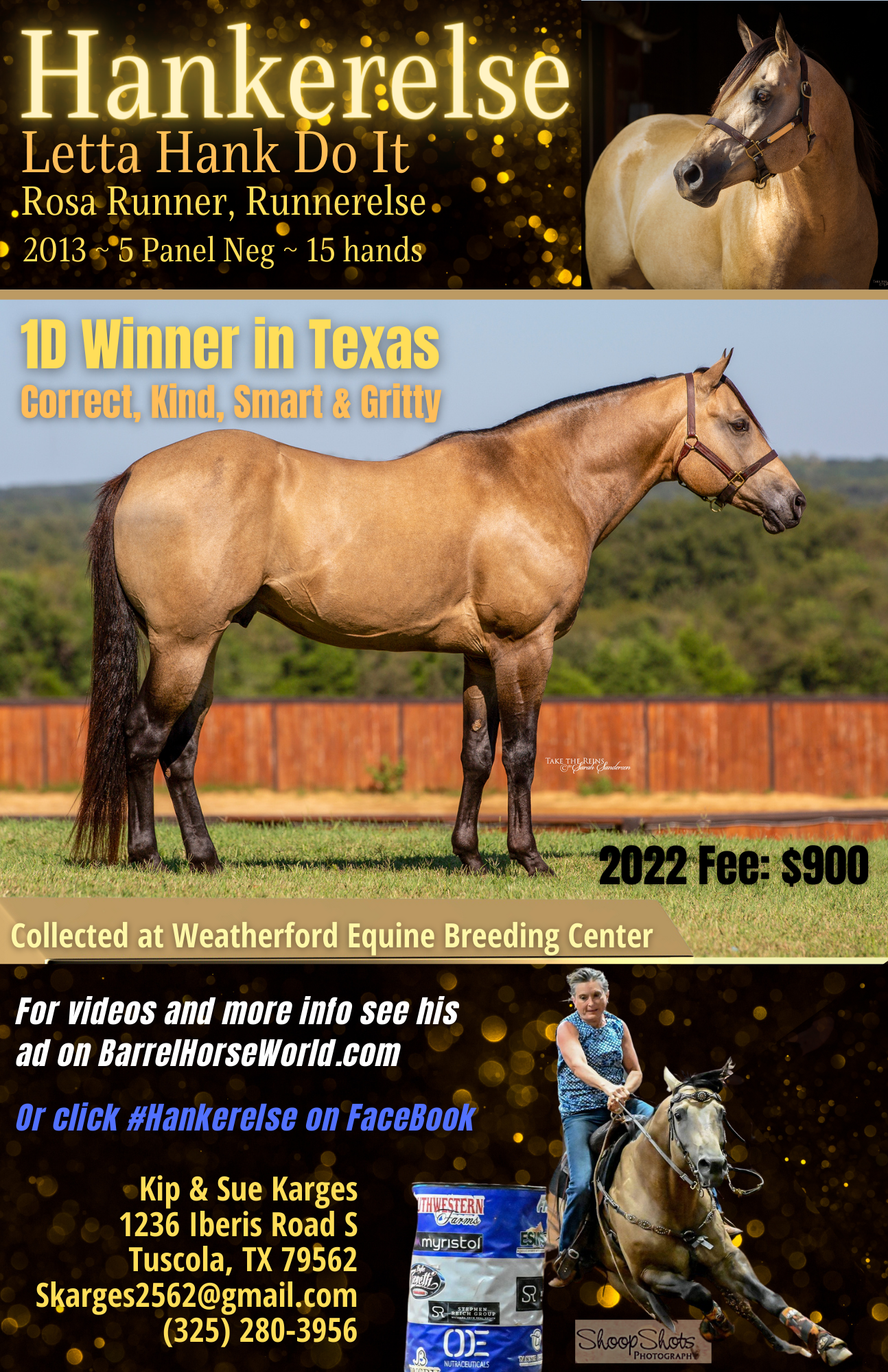 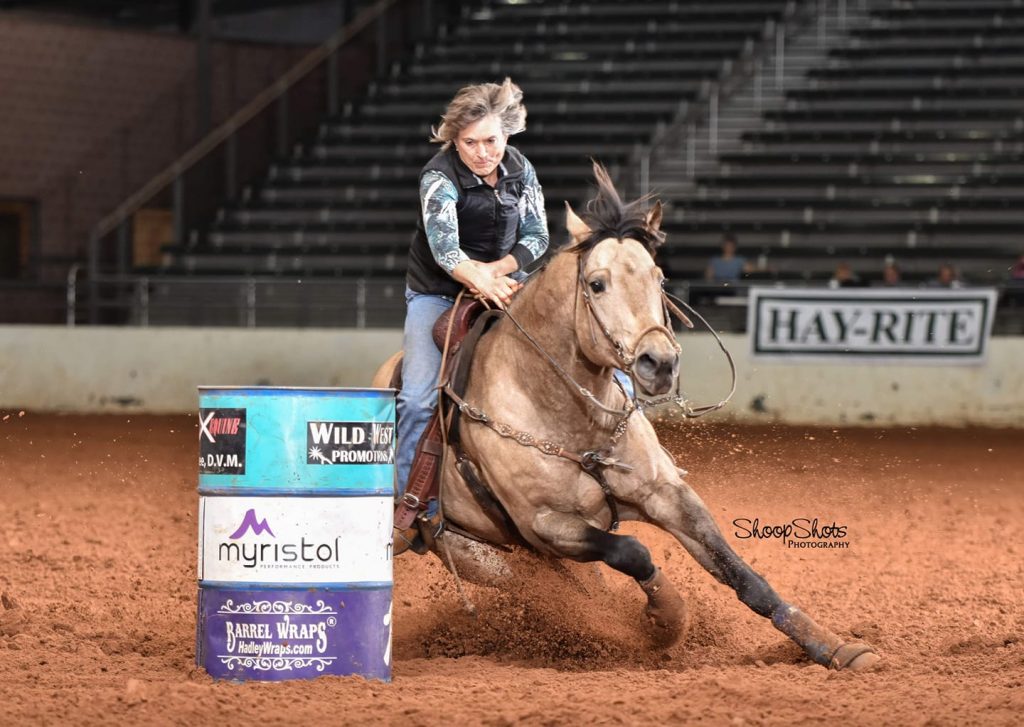 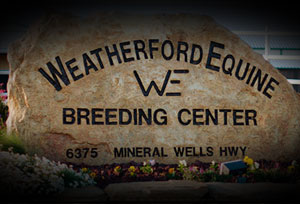 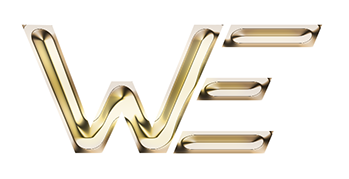